Via Ferrata in Thones

Well the snow’s all gone and the lifts aren’t quite open yet for biking so in between some cross country biking (although I did make it to the top of the Pleney downhill yesterday for a blast down, rough as old boots) and a bit of road biking we thought we’ve been exploring some of the via ferrata in the Haute Savoie. With snow still lingering around at 1800m we headed down to Thones, near Annency as the route is challenging but not at thesame altitude as Avoriaz for example which still has patches of snow kicking around. 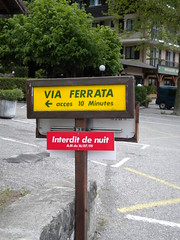 Parked up at the bottom, you can see the entire route from the hotel car park at the bottom. Total Route time 3hrs15 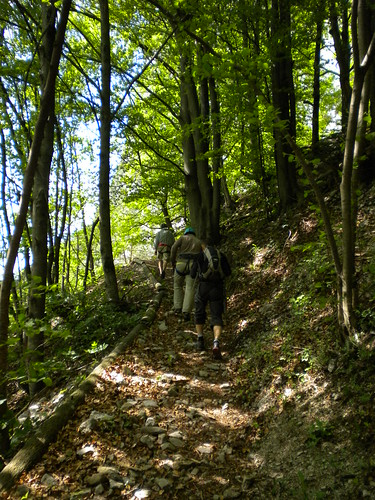 The walk in to the bottom of the climb, it’s only about 10mins up a hairpin track and gets the blood goin before you come to the start of the route. 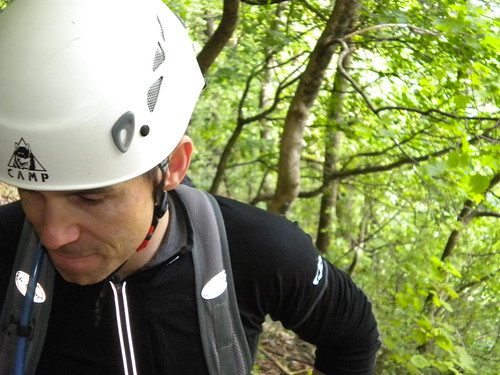 Jamie reflecting on having bought a helmet with ‘CAMP’ written across the front. 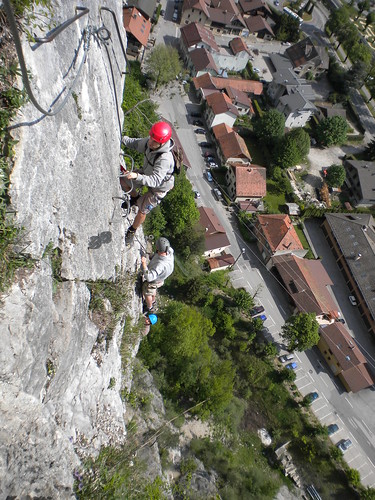 It’s not the easiest thing to get the camera out en route, so we’ve already made it over a 15ft wire bridge (literally one wire to walk on one wire to hold on too at shoulder height across a 60m drop!) 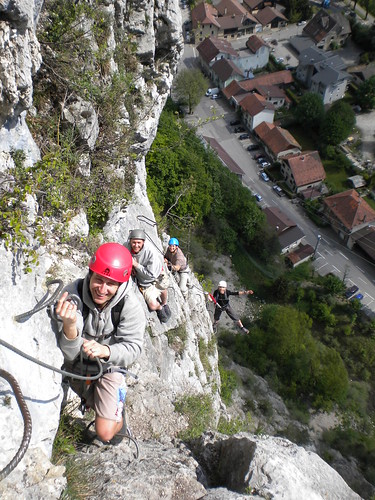 A rare spot with everyone comfortable enough to get a picture, pretty much the whole route is this shear or overhanging. 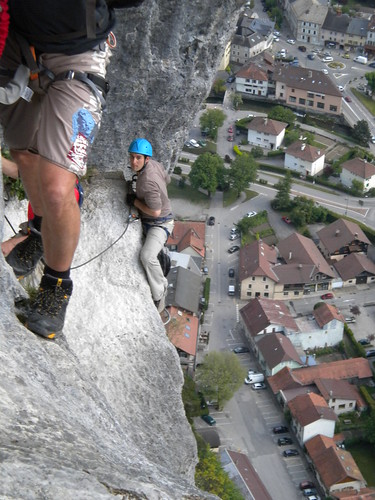 A tricky little traversing section with not much in the way of footholds. 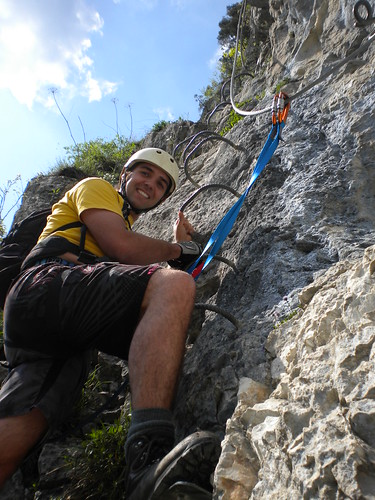 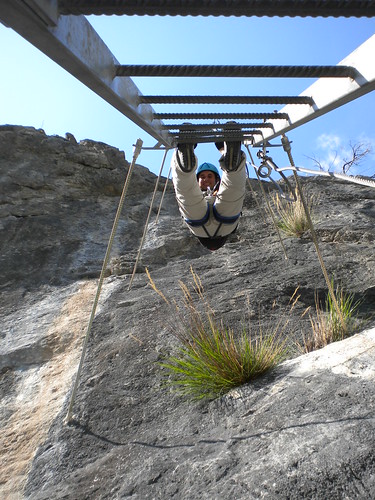 Kelvin on the overhanging ladder at the end of the route, looks out to a 250m drop or the other side of the valley depending on whether you look down or not! 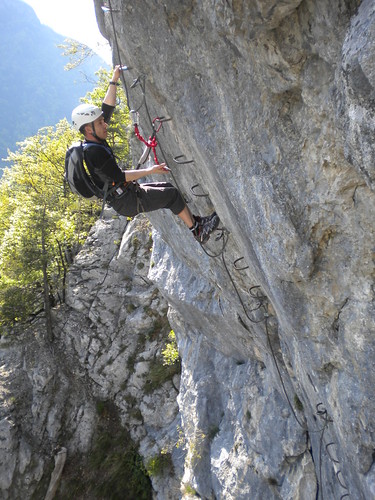 Jamie tackling the overhang section that runs parallel to the ladder, not particularly technical but really, really tiring especially as it’s right at the end of the climb. As usual the pictures don’t quite show how much of a prolonged overhang it was. 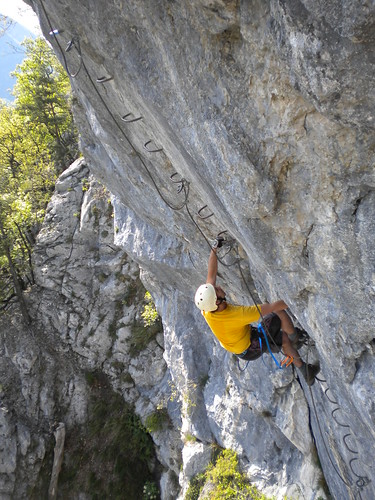 Me just coming into the steep part of the overhang, with a 250m drop straight down, exposed doesn’t quite do it justice. 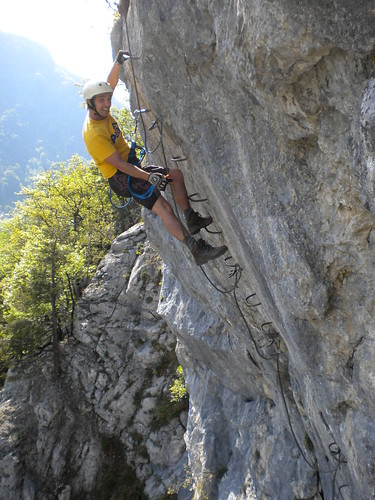 I did have to restrain myself when Robin said smile, not exactly the emotion I was going through!! 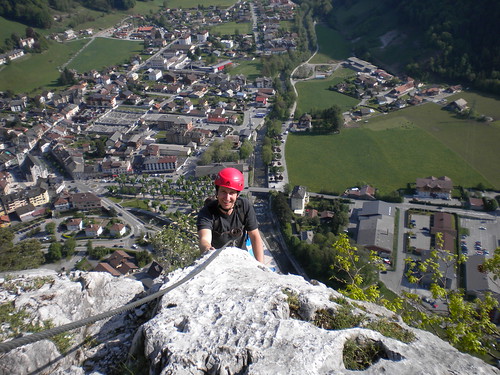 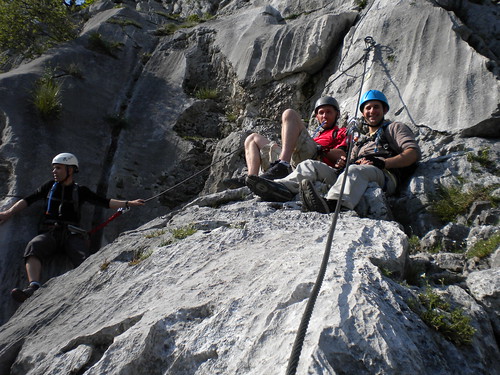 A well earned rest at the top.

View from the car park, if you look carefully at the top you can just see the almost vertical line of the final ladder. 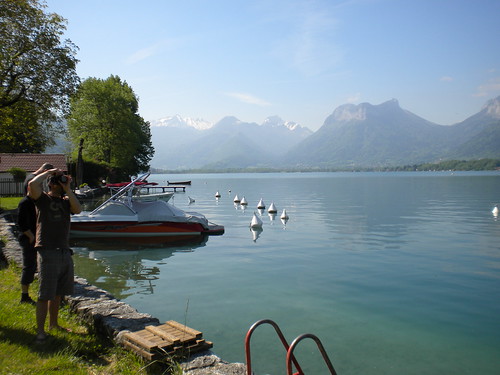 All topped of with a night in the campsite on the lake. 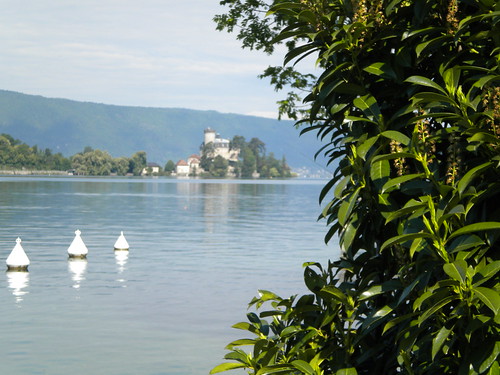 All in all an awesome day out and the most exposed mountaineering I’ve ever done, even if it is reasonably well protected climbing the overhang is still like tackling a lead climb with the potential of a x 3-5 fall. Can’t wait for the next one, probably Avoriaz when the snow melts.